Thanks again for all who responded to my last query and being a sketchup novice I’ve developed so many more. Ive stated the most recent in the topic and will just list the several below:

That’s all for now, thanks again and anything Help is appreciated.

Not sure I totally understand you, however, if you’re wanting to leave a face behind while push/pulling on iPad while using an apple keyboard, the shortcut toggle appears to be “Option” or “alt”. There’s also the little toggle in the submenu for that, which you can tap on or off. 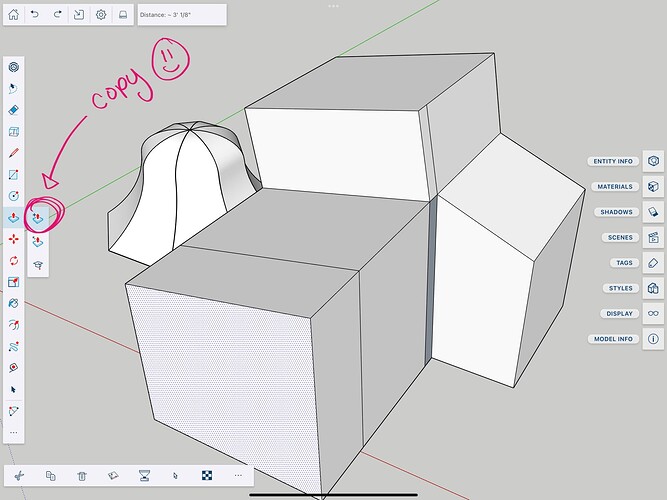 In regards to your second question, I run both the iPad version and Pro on desktop. Currently, I have become quite comfortable with the iPad version (both in usage, and the fact that I can sit on my sofa and watch tv with it in my lap). You do have to physically transfer files back and forth unless you’re working from the Trimble connect files, which would mean you needed an internet connection. I haven’t made a file that crashes my iPad version yet, but I’m willing to bet that my desktop version can handle much more. It’s also been nice to have the desktop version because it has LayOut and extensions (not that I’m good at extensions yet).

I kind of consider the iPad version to be the “Sketchbook” version. Portable, more than gets the job done, but doesn’t have the entire studio at hand… whereas the desktop version has all the bells and whistles of a fully stocked art studio, but lacks the portability.

They actually do work together very well if you think of them that way.